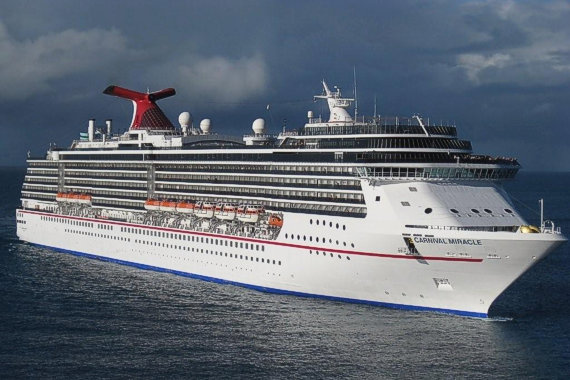 Some people are devoted to cruise holidays while to others they are a complete anathema – certainly not their dream vacation. Lisa and I love to sail away and had several wonderful experiences. We went to Norway with Princess, the western Mediterranean with MSC, Hawaii with Norwegian, and we crossed the Atlantic with Royal Caribbean.

This time, we had experienced a more than disappointing first half of our vacation, as described in the first two posts on the subject. Therefore, we were really looking forward to enjoying the week-long cruise on board the Carnival Miracle.

It was a good start, we arrived in San Diego airport and, received help from its wheelchair assistance staff as I have multiple sclerosis and use a wheelchair.  Together, we very quickly found the Carnival team and were taken by bus direct to the ship.

Having got through check-in procedures, crew members designated to help passengers with disabilities escorted us to our cabin. On arrival, we found that the mobility scooter Lisa hired because of her knee problem, had been delivered as promised. More good news!

The cruise itself was nothing to write home about, although all the Carnival staff with whom we came into contact, were pleasant, efficient, and could not have been more helpful. Great customer service.

Catering, however, was one let-down after another.

Horatio’s buffet restaurant had a layout that was confusing and nothing like any we have seen on any other ship. It was so confusing that you needed a week just to understand it. And the quality of the food we ate there was poor to adequate; certainly nothing good. Even the fries, which are so easy to cook, were among the worst I have ever tasted.

We did not try any of the ship’s speciality restaurants, preferring to eat our evening meals in the main dining room. Lovely staff wiling to go that extra mile, courteous, and efficient – except for one forgotten cup of tea.

Meals, though, were mediocre at best. More attention had been given to presentation, which was excellent, rather than quality. Being qualified in food safety and having spent four years as a judge in an annual restaurant competition, I feel more than competent to be a critic in this area.

One meal, that I had the misfortune to order, was described on the menu as being served with ‘brown potatoes’. When it arrived, it had two quarters of one small potato. Obviously, I complained.

Having experienced inedible, hard ‘al dente’ vegetables, one night I asked the waiter if I could have them well-cooked and soft to eat. He said ‘yes’ but when they arrived, although they had obviously been cooked longer, they were still hard. After trying to eat them, they were left on the plate. The starters and desserts I tasted were better than the main course dishes but they could have been improved. One evening I ordered just ice cream as my dessert. I knew that the kitchen could not mess that up. It was not a choice on the menu, but it was still served.

Entertainment was a bit hit-and-miss. The nightly theatre show was good but, at 40 minutes, was incredibly short. On the other hand, its interactive, live Clue/Cluedo game over five days was great fun. We also enjoyed ice carving and taking part in a couple of quizzes.

One day, Lisa was unlucky enough to fall in our bathroom and could not get up. I called for help and it soon arrived, a combination of medical and household staff plus an officer. Most impressive. We were taken to the ship’s medical centre where Lisa had tests and treatment before being released. Top marks for the medical team’s fast response plus it’s friendly, knowledgeable, and efficient service.

At the end of the week, I was already feeling unwell by the time we disembarked back in San Diego. After a delay of some four hours in the rain and cold, we finally found transport that could take a wheelchair. This took us to our pre-booked hotel for our one-night stay.

The next morning, I was too weak to get out of bed. To cut a long story short, instead of flying home, an ambulance rushed me to hospital where I was admitted.
It seems that, somehow, I had picked up an infection or virus on board Carnival Miracle. Such is life.

Leaving health issues on one side, on the overall quality of the cruise alone,  I doubt we will cuise with Carnival ever again.

Unfortunately, I have been forced to scrap my car and need to replace it, urgently. I also have a large bill from my stay at the hospital in America.
Please help me meet the costs of a wheelchair accessible vehicle and the hospital care. If you can help by making a donation, however small, click HERE.
Thank you

50shadesofsun.com is the personal website of Ian Franks. He enjoyed a successful career as a journalist, from reporter to editor in the print media. He gained a Journalist of the Year award in his native UK. More recently, he was a freelance medical writer and editor for various health information sites. Ian received a diagnosis of MS in 2002 and now lives in the south of Spain. He uses a wheelchair and advocates on mobility and accessibility issue.